Flags and pennants are short-term continuation patterns that are consolidation, or simply a pause, in the prevailing trend. These patterns are usually preceded by a sharp advance or decline with heavy volume. Without a sharp move, the reliability of the formation becomes suspicious. There are two parts to both the flag and pennant patterns and both include a flagpole.

A flag is a small rectangular pattern that slopes against the prevailing trend (i.e. if the current trend is up, then the slope would be down). On the other hand, a pennant is a small symmetrical triangle that begins wide and then converges as the price fluctuates. In general, the slope of the pennant is flat.

In most cases, the flag/pennant pattern only lasts between 1 to 4 weeks. A flag that is 12 weeks old is considered a rectangle while a pennant more than 12 weeks old is considered a symmetrical triangle. For a bullish flag or pennant, a break above resistance means that the previous up-trend is still in place while for a bearish flag or pennant, a break below support provides a confirmation that the prevailing down-trend has resumed.

Volume plays an important role in the flag/pennant pattern. Volume levels should be heavy during the rise or fall that forms the flagpole and also, an increase in volume during the break of resistance, or support, provides confirmation of the formation and the likelihood for the prevailing trend, whether up or down, to continue.

In the above example of a pennant, the price starts with an up-trend and takes off at point A on the higher volume, forming the flagpole in the process. it then consolidates for about a couple of weeks before re-testing the high set by the beginning of teh penant at point B. Once it broke through the resistance, with increased volume, confirmation of the pattern and the prevailing up-trend continued. 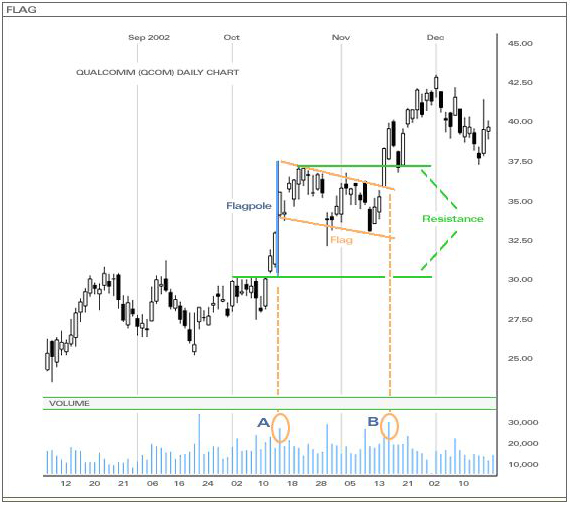 In the above example of a flag, the price starts with the up-trend and takes off at Point A on higher volume, forming the flagpole in the process. It then consolidates for about a month before retesting the high set by the flag at point B. Once it broke through the resistance level, with increased volume, confirmation of the pattern was provided and the prevailing up-trend resumed.

Treasuries See Further Downside Ahead Of Next Week's Fed Meeting

How do I recognise Congestive Heart Failure (CHF) symptoms?

FPIs adopt cautious stance ahead of Budget; take out Rs 17,000 crore from equities in January

FPIs adopt cautious stance ahead of Budget; take out Rs 17,000 crore from equities in Jan

FPIs adopt cautious stance ahead of Budget; take out Rs 17,000 cr from equities in Jan