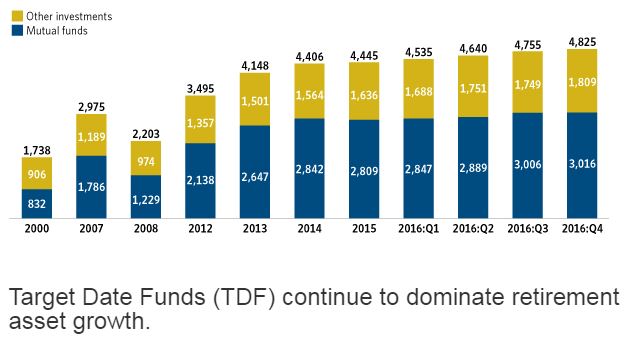 ForexTV Retirement Intelligence Unit set out to analyze the distribution of 401k Advisor market, RIA/Broker-Dealers and 401k Providers; as well as distribution of assets. We wanted to know what the 401k market looks like and how will it change in the next three-five years.

ForexTV Retirement Intelligence Unit took a snapshot of advisors and providers that make up the 401k market. With retirement on more people’s mind as baby boomers prepare to leave the work force and Millennials unsure about the future of Social Security, it’s no wonder that defined contribution (DC) plans led by 401ks and IRAs fueled by rollovers are dominating. According to the Investment Company Institute, DC plans and IRAs accounted for almost $15 trillion of the $25.3 trillion in retirement assets with 401ks making up 63% of DC plans growing 8.5% in 2016.

Which means that over half of all DC plans, mostly smaller ones, do not have an advisor with minimal qualifications. That will surely change as the move to fiduciary advisors heralded by the DOL rule will force many advisors out of the market either on their own volition or because their broker dealer or RIA does not want to incur the liability.

There are less than 50 BDs and RIAs that have a focus on DC plans dedicating minimal resources, yet there are thousands of BDs and RIAs. The DOL fiduciary rule is forcing many distributors to take a hard look at advisors working on 401k plans to determine if they want to provide support or not. Which in turn is leading advisors looking to focus on 401k plans to seek organizations that offer the resources and support to manage and grow a corporate retirement practice.

Though there are only 38 national record keepers, there are more than 500 regional record keeping TPAs (third party administrators) and a total of 4,000 compliance TPAs that provide compliance and consulting but not record keeping services. Consolidation will continue for national providers following trends in the airline industry as costs continue to rise. If legislation allowing unaffiliated companies to join MEPs (multiple employees plans) passes, consolidation may be expedited with smaller plans moving from their current provider to join a MEP.

So what does this mean for 401k and even 403b plan sponsors? Make sure you have an experienced advisor who has the backing and resources of their BD or RIA to help you find the right record keeper and TPA to service your plan. Otherwise, you will find yourself in the jungle without a guide in a world getting more dangerous with increased lawsuits and scrutiny by lawmakers.

Follow me
Latest posts by Timothy Kelly (see all)
2017-05-03
+Timothy Kelly
Previous: Euro zone GDP Q1 2017 at 0.5% as expected
Next: Why Retirement Plan Auto Portability is Important to Every Plan Sponsor

Wage gains for U.S. job hoppers hit record high over those who stay

Long story short: From recruiting to layoffs, are your workforce management tactics effective?