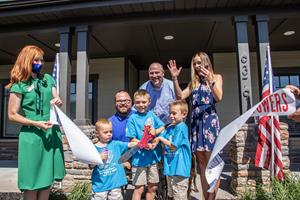 SFC Travis Vendela and his family cut the ribbon outside of his new mortgage-free smart home in Huntsville, Utah 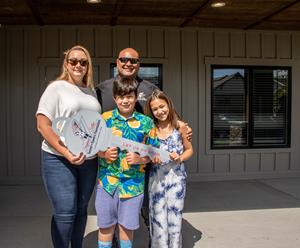 SGT Saul Martinez and his family outside of their new smart home in Bozeman, Montana

In February 2007, SFC Vendela was on his third deployment to Iraq when his Humvee was struck twice by explosively formed penetrators. He survived the blast but lost both legs above the knee.

Three months later, in May 2007, SGT Martinez was in the lead vehicle of a convoy in Salman Pak, Iraq when an explosively formed penetrator detonated. SGT Martinez lost both legs, one above the knee and one below the knee.

On July 1, SGT Martinez, his wife and their two children were welcomed into their brand new, mortgage-free smart home in Bozeman, MT.

The moment he walked into his new home was an emotional one.

“Not only am I comfortable in my own home, but I have zero worries here and what it means for the future for us, and our kids,” Martinez said.

On July 3, SFC Vendela, his wife and their three sons received the keys to their smart home in Huntsville, UT.

For SFC Vendela this home brings a sense of accomplishment, “This home right here, I want to say thanks to Tunnel to Towers  and all you guys who made it possible, this home is something my kids can put a stamp on and say dad did this.”

The two families will be able to celebrate the holiday weekend in their new homes, where every feature is designed to enable these heroes to live as independently as possible.

The homes are both one level – there are no steps or carpeted hallways – and every doorway is wide enough to accommodate a wheelchair. Both homes are designed to allow SGT Martinez and SFC Vendela to move freely from the garage to any room of the home without running into a single obstacle.

The essential features of the homes, including the lights, thermostat and security system, are all controlled by a touchscreen or smartphone app, allowing both families to control the basic functions of their home from anywhere.

Both SGT Martinez and SFC Vendela are looking forward to cooking more and helping in their kitchens, which feature space below the sink so they can wash dishes, lower kitchen islands, cabinets with pull-down shelves and mechanical stoves that lower to wheelchair height.

“We know the small inconveniences these heroes face doing things we don’t even think about doing. Things that take us seconds, sometimes take them minutes. We build these homes so they can cook, head out into their backyard or check in on their kids with a little less effort to make their lives easier right away,” said Tunnel to Towers CEO and Chairman Frank Siller.

For more about the Stephen Siller Tunnel to Towers Foundation, please visit Tunnel2Towers.org.

About the Stephen Siller Tunnel to Towers Foundation

For more about the Stephen Siller Tunnel to Towers Foundation, please visit tunnel2towers.org