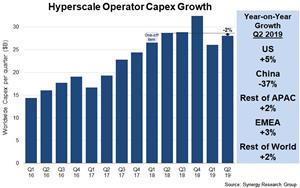 RENO, Nev., Aug. 21, 2019 (GLOBE NEWSWIRE) — New data from Synergy Research Group shows that hyperscale operator capex in the second quarter topped the $28 billion mark, up substantially from the first quarter but 2% down compared with the record-setting levels seen last year. This follows a similar pattern to Q1 2019. Last year’s first quarter number was boosted by Google’s $2.4 billion purchase of Manhattan real estate, but after excluding that exceptional item, Q1 capex was also down 2% year on year. The main factor holding back hyperscale capex growth is China. Alibaba, Tencent, JD.com and Baidu all reduced their capex spending substantially, leading to a 37% year-on-year reduction in Chinese hyperscale capex. This was in marked contrast to the rest of the world. Hyperscale capex in the United States was up 5% year on year, while in EMEA, APAC excluding China and the rest of the world, capex growth was in the 2 to 3 per cent range.

The hyperscale data is based on analysis of the capex and data center footprint of 20 of the world’s major cloud and internet service firms, including the largest operators in IaaS, PaaS, SaaS, search, social networking and e-commerce. The top five hyperscale spenders in Q2 were Google, Amazon, Microsoft, Facebook and Apple, whose capex budgets far exceed the other fifteen hyperscale operators. Four of them saw big increase in capex spending in Q2, with Apple being the exception. Outside of the top five, other leading hyperscale spenders include Alibaba, Tencent, IBM, JD.com, Baidu and Oracle. Much of the hyperscale capex goes towards building, expanding and equipping huge data centers, which have now grown in number to almost 470.

“Usually it is the big five that dictate the scale and trends in hyperscale capex, but the drop-off in spending in China has been so marked that an otherwise strong worldwide growth story has been transformed into a modest capex decline,” said John Dinsdale, a Chief Analyst at Synergy Research Group. “If we take China out of the data then hyperscale capex grew 4% over the record-setting levels seen last year. In aggregate across Google, Amazon, Microsoft, Facebook and Apple, Q2 capex increased 7%. The situation in China is likely to be a short-term phenomenon, however, as the four Chinese hyperscale operators continue to grow revenues more rapidly than their US-headquartered counterparts. After some short-term financial belt-tightening, we expect to see Chinese capex rise strongly once again.”

Synergy provides quarterly market sizing and segmentation data on cloud and related markets, including company revenues by segment and by region. Synergy Research Group (www.srgresearch.com) helps marketing and strategic decision makers around the world via its unique insights and in-depth analytics.
To speak to an analyst or to find out more about how to access Synergy’s market data, please contact Heather Gallo @ [email protected] or at 775-852-3330 extension 101.

A photo accompanying this announcement is available at: https://www.globenewswire.com/NewsRoom/AttachmentNg/9a5a6e91-d237-49e0-82bf-34a182ef6da7