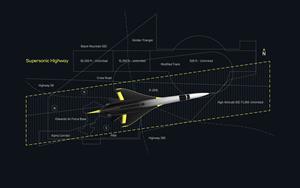 The partnership includes use of one of several FRI hangars located at Mojave Air and Space Port beneath the supersonic corridor. A custom built space gives Boom a presence at XB-1’s testing site and allows it to reassemble XB-1 after transport to Mojave and immediately begin testing.

Boom will also sub-lease a portion of the FRI Headquarters, building a custom state-of-the-art space to support XB-1, including a fully instrumented flight test control room and an XB-1 simulator room with cockpit and visual displays. The agreement includes use of one of several FRI hangars located at Mojave Air and Space Port beneath the supersonic corridor. This custom space gives Boom a presence at XB-1’s testing site and allows it to reassemble XB-1 after transport to Mojave and immediately begin testing.

“Flight Research provides essential equipment and superior facilities at the Mojave Air and Space Port, enabling us to finalize and fly XB-1,” said Boom founder and CEO, Blake Scholl. “We specifically selected the T-38 for our flight test program because of its similar flight characteristics and ability to chase XB-1 through low speed supersonic flight. This is an exciting time at Boom and we’re glad to have a partner in FRI to help us get to the finish line.”

“With Boom, we’re presented with an opportunity to partner with a dynamic and ground-breaking organization that is challenging conventional wisdom about flying,” said Scott Glaser, Senior Vice President of Operations at FRI. “This will be a new supersonic testing project for us, and we couldn’t be more excited to welcome Boom to this historic airfield and to outfit a space to meet their needs. We look forward to contributing to the return of supersonic commercial air travel.”

About Boom
Boom Supersonic is redefining what it means to fly by building Overture, history’s fastest commercial airliner. Boom’s vision is to bring families, businesses, and cultures closer together through supersonic travel and make the world dramatically more accessible. The company is backed by world-class investors and has 30 aircraft on pre-order from Japan Airlines and Virgin Group. Founded in 2014, Boom has assembled a world-class team of over 130 full-time employees who have made contributions to over 139 air and spacecraft companies. For more information, please visit https://boomsupersonic.com.

Contacts for the Media

A photo accompanying this announcement is available at https://www.globenewswire.com/NewsRoom/AttachmentNg/cbb1d186-e200-435f-a6c6-e398b3bf3447.