CGTN: The War in the Shadows: Challenges of Fighting Terrorism in Xinjiang

Posted by: GlobeNewswire in Top News 15 days ago

The War in the Shadows 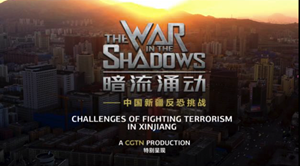 FOR IMMEDIATE RELEASE. (This material is distributed by MediaLinks TV, LLC on behalf of CCTV. Additional information is available at the Department of Justice, Washington, D.C.)

WASHINGTON, April 08, 2021 (GLOBE NEWSWIRE) — CGTN releases the fourth episode in a series of compelling documentaries on the fighting terrorism in Xinjiang. The fourth exposé “The War in the Shadows: Challenges of Fighting Terrorism in Xinjiang” – the last of the series– exposes the extremist thinking and the challenges facing China’s efforts to tackle terrorism inside and outside Xinjiang.

Each documentary in the series, includes exclusive never-seen-before footage documenting the frightening the tragedies in Xinjiang and the resilience of its people and the fourth in the series will continue to keep viewers intrigued.

Xinjiang, in the far western land of China, hosted one of the world’s first and most important trade routes known as the Silk Road, which linked ancient Chinese civilization to the West through the Eurasian continent.

The land of fortune, however, has not always enjoyed tranquility. Thousands of terrorist attacks from 1990 through 2016 killed large numbers of innocent people and hundreds of police officers. Horrific stabbings and bombings wrecked the land, leaving its people in shock, grief and panic. The damage was incalculable while stability in the region quickly deteriorated. Authorities have been trying hard to restore peace to this land.

It gives answers to these questions: Why has violent terrorism continued to plague Xinjiang? For those who were once known as “Two-faced people” among the legal and political elites in Xinjiang, how much damage have they done to anti-terrorism efforts in the region? How come poisonous education materials alleging ethnic victimization and “Turkic heroes” have been used for 13 years in primary and middle schools? Why must we stop the invisible hand of foreign advocacy abetting violent terrorism infiltrating our country?

The documentary reveals the methods used by extremist and separatist forces including the “Two-faced people” among the region’s high-ranking officials, as well as how music and videos advocating violent terrorism and inciting ethnic hatred penetrated the region. Plus, it also tells of the very hardship police officers have been mired in for decades.

Over the past four years, violence has largely been contained, giving way to rapid urbanization and economic growth. Safety and tranquility never come easy. But it’s only a preliminary victory in China’s fight against terrorism.

The documentary is 55 minutes long and consists of four parts: “The Network,” “Enemies Within,” “The Textbooks,” and “The Black Hands.”

A photo accompanying this announcement is available at https://www.globenewswire.com/NewsRoom/AttachmentNg/9add7301-8e3e-42a9-bffd-01e9d4113fb2

Latest posts by GlobeNewswire (see all)
2021-04-08
GlobeNewswire
Previous: 100 Vaccination Centers Get a Boost from AmeriCorps
Next: CityWatch: As New York coffers recover from a crushing year, how dependent is the city on federal funding?