J.C. (Max) Wilkinson shares his research in his debut publication 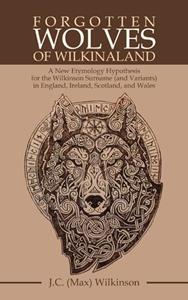 CHARLESTON, W.V., Nov. 27, 2020 (GLOBE NEWSWIRE) — In the new book, “Forgotten Wolves of Wilkinaland: A New Etymology Hypothesis for the Wilkinson Surname (and Variants) in England, Ireland, Scotland, and Wales” (published by Archway Publishing) author J.C. (Max) Wilkinson takes readers on a journey through history, saga, myth and linguistics to explain why the standard etymology about the origin of “Wilk” root surnames is incomplete and in large measure wrong.

During his genealogical research, the author found multiple pieces of corroborative evidence that Wilkinson, and other “Wilk” root surnames in England, Ireland, Scotland and Wales, are not predominantly Norman in origin, as almost universally claimed. Rather, he submits they are patronymics derived from the Frisian, Danish and Flemish given names of Wilke, Wilken, Wilko, and Wilkain, which are rooted in the Slavonic word “wilk” meaning wolf (the Slavic analog to Norse Ulf and Germanic Wulf). Multiple historic accounts describe the migration and assimilation of the Slavic (Wend) Wilzi tribe into the regions of Frisia and Pomerania on the Baltic coast near Denmark shortly after the collapse of Rome. The Frisians and Danes who assimilated the Slavic Wilzi then came to England, Ireland, Scotland and Wales, first during the Anglo-Saxon migration, and later during the Viking invasions, bringing these names with them. Wilkinson also demonstrates how the Slavonic “wilk” origin remains visible in the Germanic mytho-folklore that immortalized the name of King Wilkinus in epics of the era such as the Didrek of Bern (or Wilkinaland) saga and of Wilken in the Danish ballad of Langbeen Riser.

Wilkinson hopes that in reading his book, people will gain an appreciation for how “The Wilkinson surname (and variants) has a deep and fascinating pre-Norman origin in the history of the migrations and invasions of the northern European peoples and the mytho-history they preserved in their literature.”

“Forgotten Wolves of Wilkinaland” is available for purchase on Amazon at: https://www.amazon.com/Forgotten-Wolves-Wilkinaland-Etymology-Hypothesis/dp/1480895903.

Available at Amazon and Barnes & Noble

J. C. (Max) Wilkinson is a father of three (Rosemary, Samuel, and Nicholas), a Catholic Christian, a constitutional conservative, a former U.S. Army infantry and engineer officer (lieutenant colonel, retired) and a combat veteran of both Iraq and Afghanistan. He is a lay genetic and traditional genealogist, a hobby he has been grateful to build upon from substantial familial research begun by his late paternal uncle, Robert Wilkinson. Born and raised in Iowa, he is a graduate of the University of South Dakota (Bachelor of Science, 1991) and the University of Iowa (Juris Doctor, 1996). He has lived and practiced law in Virginia and West Virginia for the last 24 years. “Forgotten Wolves of Wilkinaland” is his first published book.

Simon & Schuster, a company with nearly ninety years of publishing experience, has teamed up with Author Solutions, LLC, the worldwide leader in self-publishing, to create Archway Publishing. With unique resources to support books of all kind, Archway Publishing offers a specialized approach to help every author reach his or her desired audience. For more information, visit www.archwaypublishing.com or call 844-669-3957.