Posted by: GlobeNewswire in Top News 21 days ago 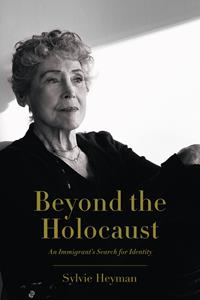 Book cover image of “Beyond the Holocaust” by Sylvie Heyman

NAPLES, Fla., July 14, 2020 (GLOBE NEWSWIRE) — “Beyond the Holocaust: An Immigrant’s Search for Identity” by Sylvie Heyman details the harrowing journey she, along with her family, took when they fled Europe during World War II, sought refuge in Brazil, were smuggled into Argentina and ultimately immigrated to the United States. The book also blends Heyman’s personal experiences with scholarly theories about language, nationality, and identity to better understand the long-term struggles and challenges immigrants face.

Heyman was inspired to write “Beyond the Holocaust” after the insistence of her son and granddaughter to document her experiences as a refugee and immigrant as well as to clear up the difference between a Holocaust survivor and Holocaust refugee. As refugees, Heyman and her family were constantly on the go, running from the Nazis as they shadowed them wherever they went. They were able to get away physically unscathed, a miracle they were grateful for, however, it did not negate the long-range effect war would forever impart on their lives.

“Although I lived through the war, the war did not live through me and while I was a refugee from the Holocaust, I could never call myself a Holocaust survivor,” said Heyman. “And that has haunted me throughout most of my life. The guilt that I had survived was tucked deeply into my psyche and what emerged was a nationality identity conflict which I focus on in this book.”

“This is a compelling autobiographical account of Sylvie Heyman’s search for identity…as Heyman navigates new languages and cultures, she invites readers to share an extraordinary journey across time and space. This remarkable account – historically, politically, socially, and educationally – challenges readers to seek joy and hope in times of despair and loss.” – Dr. Bonny Norton, FRSC, Professor & Distinguished University Scholar UBC Dept. of Language and Literacy Education

Heyman hopes her story helps increase awareness around the challenges most immigrants have when assimilating into a new culture. She also wants it to shine a light on the struggles adolescents face living in a new country so it can be better understood by teachers, counselors, mental health care providers, immigration lawyers, social workers, and the public at large. To learn more, please visit www.sylvieheyman.com.

About the Author
Dr. Sylvie Heyman is a seasoned health care practitioner as a registered nurse, chiropractor, and acupuncturist with a life-long deep-seated passion for writing. She published her first book “Make it a Habit: Creating Health and Happiness for your Body, Mind, and Spirit” when she was 79 years old and three years later, she completed “Beyond the Holocaust.”

Balboa Press, a division of Hay House, Inc. – a leading provider in publishing products that specialize in self-help and the mind, body, and spirit genres. Through an alliance with the worldwide self-publishing leader Author Solutions, LLC, authors benefit from the leadership of Hay House Publishing and the speed-to-market advantages of the self-publishing model. For more information, visit balboapress.com. To start publishing your book with Balboa Press, call 877-407-4847 today.

Do you want a relationship that is alive, exciting and sexually satisfying?