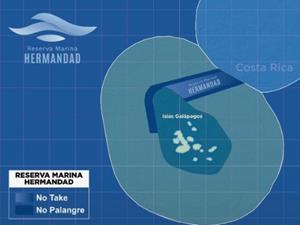 The ‘Reserva Marina de Hermandad’ includes 30,000 sq km where all extractive activities are prohibited (no-take zones) including critical ecosystem areas, migratory routes, and feeding areas for threatened marine species, and 30,000 sq km as a buffer zone where the use of long lines is prohibited. This new reserve increases the area of protection to nearly 200,000 sq km, when combined with the existing Galapagos Marine Reserve. It is also a key component of the newly announced mega-marine protected area known as the Eastern Tropical Pacific Marine Corridor (Corredor Marino del Pacífico Este – CMAR), which has recent commitments from the Presidents of Costa Rica, Panama, and Colombia to link the four countries Exclusive Economic Zones (EEZs) covering 500,000 sq km of protected waters.

WildAid’s Marine Program has been working in the Galapagos for over 20 years improving marine enforcement operations systems and implementing a comprehensive marine protection plan with the Galapagos National Park. WildAid was instrumental in facilitating a partnership between the

Ecuadorian Navy and the Galapagos National Park rangers to enforce GMR laws and to prevent illegal fishing and shark poaching within its borders. WildAid and its partners will be working to implement protection mechanisms and procedures that will be deployed across the new protected area, including state-of-the-art technologies to significantly enhance and improve control of the marine reserve.

WildAid President Peter Knights applauded the action, “It is essential that nations take bold actions to stem the tide of environmental degradation. President Lasso and Ecuador’s leadership for this historic decree is outstanding, and the collaboration of Costa Rica, Panama and Columbia to protect CMAR is vital and laudable. As we mark twenty years of our partnership with the Galapagos National Park Directorate to prevent illegal fishing, we are honored to continue to support what we believe is one of the best marine protection systems in the world.”

Despite the establishment of new global marine protected areas (MPAs) every year, many countries are ill-equipped and under-resourced to properly manage and enforce their MPAs. Often, the critical step from declaration to implementation falls short – resulting in limited conservation benefits and parks in name only or ‘paper parks’. WildAid’s Marine Program is working with government, nonprofit, and community partners around the world to strengthen the protection and enforcement of MPAs and coastal fisheries.

Manuel Bravo, Latin America Regional Director for WildAid Marine said, “These actions protect an area of incredibly high biodiversity, but also preserve the importance of connectivity between those regions. Wildlife that travels long distances in the open-ocean don’t care about boundaries on a map, and this expansion will help protect the unique and often threatened megafauna that migrate through these waters.”

Today’s decree follows many months of dialogue with artisanal fishermen and the industrial fishing fleet, who agree on the importance of expanding this zone and the benefit ‘spillover’ of fisheries resources from increased fisheries production. The action is accompanied by an international financing structure of a debt-swap for nature conservation, to implement realistic management of the newly established boundaries.

“Most people don’t realize that nearly 60 percent of all marine protected areas lack effective enforcement. Our focus is on closing this gap. Starting in the Galapagos, we are creating ‘centers of excellence’ to share best practices and help partners prioritize smart and effective enforcement strategies and funding mechanisms.” said Meaghan Brosnan, Director of WildAid’s Marine Program. “In addition to our work in Ecuador, we are working with the governments of Panama and Costa Rica to help design marine protection systems, effective enforcement, and legislative strategies to ensure the long-term sustainability of these priority marine areas.

Not only is this important for threatened marine wildlife, but also to sustain essential economic drivers such as tourism, fishing, and maritime transport–which generates close to USD 3 billion annually. The leadership demonstrated by the Ecuadorian government sets the stage to help achieve the global goal of protecting 30 percent of the ocean by 2030.

3 Bad Credit Loans To Be Avoided At All Costs

Cloud Music Streaming For Individual Use Projected To Reach Around US$ 23 Bn By 2031.: Fact.MR Study