Posted by: GlobeNewswire in Top News 2 days ago 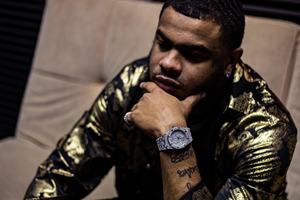 Los Angeles, CA, Aug. 01, 2020 (GLOBE NEWSWIRE) — In the midst of the Covid-19 pandemic, the music industry has been impacted across all sectors. Countless events such as concerts, award shows, & festivals have all been cancelled or postponed. As the crisis continues to spill over into the operations of record labels, venues, streaming platforms, and other companies in various corners of the music industry, Rapper/Singer/Songwriter Jaye Bullo has been moving full speed despite the unprecedented setback that threw the music industry into crisis.

The Beautiful Music Empire CEO is showing no signs of slowing down. Beginning 2020 gradually emerged with the release of his sophomore studio album “God Forgive Me, Vol. 2”. Receiving widespread acclaim by several publications & critics, the album has been praised for its melodic transitions blended with mafioso rap themes, reflecting both the dark and the heartfelt side of the rapper. Several music videos have been shot & released to coincide with the album including “Crown”, “Awesome”, and most notably “Hold My Hand”. A video for “Good Ones Go” was also shot and released in June although the single was not featured on the album. The 25 year old North Carolina rapper appears to be working towards building the independent entity into a lucrative venture.

While serving as an independent record label, Beautiful Music Empire also houses a film department, and an in-house production collective known as the Beautiful Music Mafia. Acting as the labels president and flagship artist, Jaye also plans to mold and cultivate the careers of other artists as well. The label has no artists signed yet though he aims to executive produce future projects for future signees and venture off into film making among a few diversified strategic business affairs.

In March, covid-19 dismantled plans for concerts and festivals. Several of which Jaye was booked for. Revenue streams for artists and promoters have both been cut short due to the effects of the pandemic, causing entertainers and major corporations to potentially miss out on millions of dollars. Although all live events have been cancelled, he plans to release a slew of new content in upcoming months further expanding his reach. Citing tycoons like Shawn “Jay-Z” Carter, & Sean “Diddy” Combs as his biggest inspirations, the 25 year old mogul seems to be on a promising path.