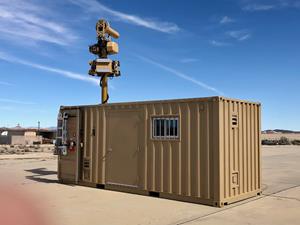 Liteye has over $85M in counter drone contracts with the US Government and consistently provides Combat Proven products with over 1000 defeats against enemy drones flown by ISIS, Taliban and others.  Founded by Kenneth Geyer and Tom Scott in 2000, Liteye is ranked as one of the leading privately held companies in Colorado.

US AUDS is a backbone for Counter UAS solutions, layered with multiple capabilities to Detect, Track, Identify and Defeat malicious threats.   The C-AUDS variant (Containerized AUDS) features a state-of-the-art operator suite, hardened for use in any climate, and can easily be moved between locations.

“Liteye remains a stable and trusted leader within the Defense Industrial Base,” stated Kenneth Geyer, CEO. “As we’re seeing drone incidents escalate, it’s imperative that we’re diligent about our technology improvements, on-time delivery and performance standards. We continue working with our end-users and partners to layer capabilities into the system to remain effective against the new threats.”

Latest posts by GlobeNewswire (see all)
2020-04-08
GlobeNewswire
Previous: Next Avenue: Find purpose: It can help you get through this crisis—and you don’t have to leave home
Next: Gold: The $1640.00 level is a decent support

ORIC Pharmaceuticals to Present at the Jefferies 2020 Global Healthcare Conference

SpringWorks Therapeutics Appoints Julie Hambleton, M.D. to its Board of Directors