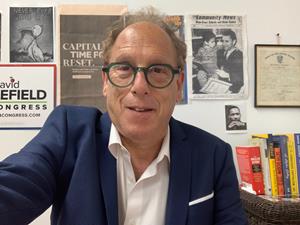 “An event that took place this week in Ocean Township was a stark reminder of how far we’ve sunk from the American ideal we’re meant to be celebrating this Independence Day weekend.  It underscores what’s at stake in this election.

Daquan Beerman, a 24-year old Black man, goes into a 7-Eleven to buy food. An employee is eating on a counter where food is prepared for customers. He’s not wearing a mask.

Beerman says something. The employee insults him and takes out a box cutter to threaten him. Beerman asks a friend to quickly call 911.

Ocean Township police arrive — several cars. Beerman is waiting in the parking lot—unarmed.  The police draw guns—on the citizen who asked for the police!

The friend, videoing, pleads with Daquan to drop to the ground, fearful that we are about to witness another George Floyd or Rayshard Brooks killing. Two white police officers handcuff him and arrest him for “unlawful possession of a weapon and making terroristic threats.”

Sadly, this is not an isolated event. It happens all too often, right here in suburban New Jersey, in the so-called “land of liberty.” Some are afraid of lawlessness and others are afraid to call the police.

But as the Black poet Langston Hughes wrote, “America never was America to me.”  For too many of our neighbors, friends and relatives, America remains a dream deferred.

On July 7 New Jerseyans vote in the 2020 Primary. This election is about who we are as a community—the values we hold, the beliefs we cherish—and the principles we struggle to defend.  I’m talking to voters about what unites us, strengthens us, and empowers us to sustain Hope, not Hate. That is the choice being made. In honoring the birth of this nation will we also chose to correct its inherent flaws, its historic injustice? Will the “We” finally gain the inclusiveness that was willfully excluded in 1776? Will we mend our wrongful assumptions? In NJ4, I believe we can. I’m running on it.

This is in my blood.  My mother was a Polish refugee from Nazi Germany who was sheltered by courageous strangers after her parents were carted away by the Gestapo—her mother to a death camp and her father to slave labor. She arrived here in New Jersey at age 11 and given an anglicized name and a new start. At 85 she tells her story to school children and they apply it to bullying, worried herself where America is drifting to.

My father was an All-State New Jersey baseball pitcher from Union, the only Jewish kid in a town known to be pro-German in WWII.  With a baseball scholarship to play at the University of Alabama, he rode south on a Greyhound bus from Newark. The driver stopped in the middle of the night as they crossed the Mason-Dixon line to wake up a Black man and send him to the back of bus. This shocked my father. He was driven out of Alabama for being a “N—lover,” and headed north to pitch for the Jersey Colored Tigers, becoming the only white (and Jewish) kid in the segregated Black leagues. These were the stories of moral courage I was raised on.

As a media professional, I’ve trained African journalists in 30 countries, advised the President of Senegal and worked for decades throughout Africa, often the only white person on the team or in the office.  What we in our ignorance call the “Third World” is way ahead of us in so many ways.  White allies like me have to lose our arrogance, lose our assumptions and open our eyes to the reality unfolding before us.  We can fix this if we talk to each other.

This is a holiday weekend unlike any other in our lifetimes.  There may be fireworks here and there, but there is also a burning fury against injustice, intolerance and inequality that won’t be extinguished anytime soon.  Our patch of central New Jersey is rooted in the principles of the American Revolution, the home of the Battle of Monmouth, and dotted with historic graveyards. As a Congressman I will not let the fierce animosity of partisanship, nor the legacy of racial divide—or any divide for that matter—halt my determination to make our 43 towns an emerging model of what can be in America IF we are honest with ourselves and are not afraid to confront the flaws of our past. That is why so much is at stake this Independence Day”.

David Applefield is a Democrat running for US Congress in New Jersey’s 4th District. Visit  www.applefield4congress.com and on Google Play or the App Store

A photo accompanying this announcement is available at https://www.globenewswire.com/NewsRoom/AttachmentNg/ede5e23e-2db9-4955-82ff-4ff66ea0862f