NYFA Filmmaking alum Issa Rae was up early Monday morning as the nominations for the 92nd Academy Awards were announced. 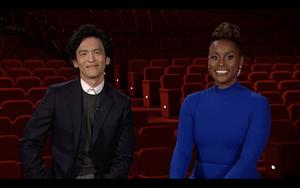 New York, NY, Jan. 17, 2020 (GLOBE NEWSWIRE) — New York Film Academy (NYFA) Filmmaking alum Issa Rae was up early Monday morning as the nominations for the 92nd Academy Awards were announced, with the usual mix of snubs, sure things, and surprises. Rae, a graduate of NYFA’s Filmmaking workshop at our Los Angeles campus in 2005, presented this year’s nominees with actor John Cho.

Rae’s star has been steadily on the rise since the debut of her HBO series Insecure in 2016. She’s appeared in music videos by Jay-Z and Drake, films like The Hate U Give, and starred in last year’s comedy Little. Additionally, Rae has been behind the scenes writing and producing, including executive producing HBO’s A Black Lady Sketch Show, a few episodes of which she also acted in. Rae was a perfect choice by the Academy to announce this year’s Oscar noms.

The New York Film Academy (NYFA) community celebrated some nominations as Rae and Cho made their way through the various categories. NYFA Filmmaking alum Anouar Smaine was one of the English-language voice actors for Best Animated Feature nominee I Lost My Body, the 2019 French drama fantasy film directed by Jérémy Clapin that premiered at last year’s Cannes Film Festival. The endearing and visually striking film tells the story of a dismembered hand that escapes from a dissection lab and goes on a journey through Paris to get back to its body, remembering the life with the young man it was originally attached to.

Smaine, who voiced the Father in the film, graduated from the 8-Week Filmmaking workshop at NYFA’s Los Angeles campus in early 2010. The Algerian-born actor, director, and playwright has numerous credits across several different disciplines, including as an actor in The Looming Tower, Westworld, Call of Duty: Black Ops 4, Veronica Mars, and the first Arabic-language original production from Netflix, Jinn. He also wrote, directed, and starred in the award-winning film Battle Fields.

Additionally, NYFA Game Design alum Guillermo Quesada helped develop the technology that allowed last year’s remake of The Lion King to be filmed on a virtual reality set. The Lion King was one of the Best Visual Effects nominees named Monday morning.

Adam Driver, who spoke with NYFA students at our New York campus in 2018, received an Academy Award nomination for Best Lead Actor for his work in Best Picture nominee Marriage Story.

Another guest speaker celebrating this year’s nominations is President of Marvel Studios and Chief Creative Officer of Marvel Kevin Feige, who spoke with NYFA students at our Burbank-based campus last October. Avengers: Endgame, the culminating film of his brainchild—the Marvel Cinematic Universe—was nominated for Best Visual Effects. His Q&A with NYFA students recently made many headlines as Feige answered questions about the MCU as well as confirmed that an LGBTQIA+ character would be appearing in the upcoming Marvel film Eternals.

New York Film Academy congratulates this year’s nominees and looks forward to seeing who goes home with an Oscar or two (or more) next month!