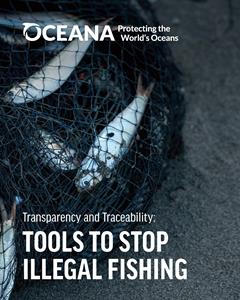 Washington, DC, March 03, 2021 (GLOBE NEWSWIRE) — Today, Oceana published a report making the case for expanding transparency and traceability to end illegal, unreported and unregulated (IUU) fishing and seafood fraud. While the federal government has taken some steps to combat these problems in the past, Oceana says more must be done to ensure that U.S. dollars are not supporting these illicit activities at sea, which can impact the economy, environment and human rights.

“Americans have a right to know more about the seafood they eat and should have confidence that their dollars are not supporting the pillaging of the oceans or human rights abuses at sea,” said Beth Lowell, Oceana’s deputy vice president for U.S. campaigns. “All seafood sold in the U.S. should be safe, legally caught, responsibly sourced and honestly labeled. Until then, honest fishermen, seafood businesses, consumers and the oceans will pay the price.”

According to Oceana, IUU fishing poses one of the greatest threats to our oceans. IUU fishing costs the global seafood industry as much as $26 billion to $50 billion annually. In the United States, up to 90% of the fish consumed is imported, with up to 32% of wild-caught seafood imports being products of illegal or unreported fishing. IUU fishing can include fishing without authorization, ignoring catch limits, operating in closed areas, targeting protected wildlife and fishing with prohibited gear. These illicit activities can destroy essential habitats, severely deplete fish populations and threaten global food security. These actions not only contribute to overfishing, but also give illegal fishermen an unfair advantage over those that play by the rules.

IUU fishing is a low-risk, high-reward activity, especially on the high seas where a fragmented legal framework and lack of effective enforcement allow it to thrive. In 2016, the U.S. government established the Seafood Import Monitoring Program (SIMP), requiring catch documentation and traceability for some seafood at risk of illegal fishing and seafood fraud.  SIMP currently only applies to 13 types of imported seafood and only traces them from the boat to the U.S. border. In 2019, Oceana released the results of a seafood fraud investigation, testing popular seafood not covered by SIMP, and found that 1 in every 5 fish tested nationwide was mislabeled, demonstrating that seafood fraud is still a problem in the United States. Seafood fraud ultimately hurts honest fishermen and seafood businesses that play by the rules, masks conservation and health risks of certain species, and cheats consumers who fall victim to a bait–and–switch.

“The Biden-Harris administration has an opportunity to lead in the fight against illegal fishing and seafood fraud, leveling the playing field for American fishermen and seafood businesses, while protecting consumers and the oceans,” Lowell said. “The United States must take decisive action to combat IUU fishing and close the U.S. market to all illegally sourced products, including seafood caught using forced labor or other human rights abuses. The United States can be a leader in traceability of seafood and transparency at sea.”

The U.S. Food and Drug Administration (FDA) is currently considering a proposed rule that would require traceability for some foods, including most seafood, throughout the full supply chain. “Oceana supports the FDA requiring traceability for seafood and suggests that the rule be expanded to include all seafood; align with SIMP; require electronic recordkeeping and reporting; and provide consumers with more information about the seafood they eat, like what fish it is, where it was caught, how it was caught or if it was farmed,” Lowell said.

In January 2021, Oceana released the results of a nationwide poll finding that Americans overwhelmingly support policies to end illegal fishing and seafood fraud. Included among the key findings, 89% of voters agree that imported seafood should be held to the same standards as U.S. caught seafood. Additionally, 81% of voters say they support policies that prevent seafood from being sold in the U.S. that was caught using human trafficking and slave labor. Eighty-three percent of voters agree that all seafood should be traceable from the fishing boat to the dinner plate, and 77% support requirements for all fishing vessels to be publicly trackable. The findings show widespread bipartisan support for policies aimed at increasing transparency and seafood traceability.

Oceana is campaigning to stop illegal fishing, increase transparency at sea and require traceability of all seafood to ensure all seafood is safe, legally caught, responsibly sourced and honestly labeled.

Oceana is the largest international advocacy organization dedicated solely to ocean conservation. Oceana is rebuilding abundant and biodiverse oceans by winning science-based policies in countries that control one-third of the world’s wild fish catch. With more than 225 victories that stop overfishing, habitat destruction, pollution, and the killing of threatened species like turtles and sharks, Oceana’s campaigns are delivering results. A restored ocean means that 1 billion people can enjoy a healthy seafood meal, every day, forever. Together, we can save the oceans and help feed the world. Visit USA.Oceana.org to learn more.

Go With The Flow with Garden Fountains Special Offerings