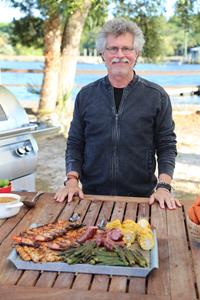 On the set in Steinhatchee, Florida for the second season of Steven Raichlen’s Project Fire. 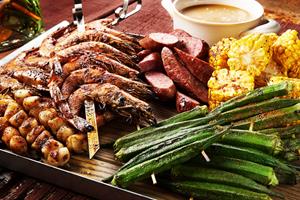 Florida shrimp boil, deconstructed and flame-charred on the grill, and side dishes from an upcoming episode of season two of Steven Raichlen’s Project Fire.

OWINGS MILLS, MD, June 13, 2019 (GLOBE NEWSWIRE) — Following the success in 2018 of Steven Raichlen’s Project Fire, the man who reinvented world barbecue, Steven Raichlen, is back with the second season of his popular public television series.  The new 13-episode season launches in July, featuring more creative projects, more fire, and more easy-to-follow instructions to help viewers take their grilling to the next level.

Through use of cutting-edge recipes, Steven Raichlen’s Project Fire takes viewers on a journey across the United States and beyond with episodes such as Gulf Coast Grill, featuring Florida oysters, clams, and shrimp, along with redfish on the half shell; Miami Spice, which gets things started with a grilled mojito cocktail; Tex Meets Mex, an exploration of how American barbecue techniques can enhance Mexican dishes; and Chino-Latino, a mashup of Asian and West Indian cooking.

This season’s opening 30-minute episode, Grilling with Wood, is inspired by a front-page story Raichlen wrote for The New York Times Food section. It’s followed by Brisket 24/7, featuring four brisket-inspired recipes including brisket breakfast tacos. Later in the season, the episode Shoulder On explores the meatiest, most flavorful cut in the meat department, with pork, lamb, and beef shoulder recipes. During Secret Steaks, Raichlen takes viewers beyond familiar T-bones and filet mignons to introduce such meaty up-and-comers as spinalis and secreto.

In the episode Green Meets Grill, Raichlen celebrates meatless grilling in all its glory. His twist on egg salad is lavished with grilled vegetables, including hearts of palm. There’s also a roasted squash and black bean pizza with queso fresco, and a cognac flambéed grilled cheese.

For Raichlen fans wondering what else is new in the world of barbecue, there’s the episode The Best Barbecue You’ve Never Heard Of, which places the spotlight on barbecue enjoyed in Alaska, Maryland, and upstate New York.

Viewers interested in watching Steven Raichlen’s Project Fire are encouraged to contact their local public television station to find out when it will be available in their area.  Local stations can be located here: https://aptonline.org/pages/viewers/Index-Stations+Near+You.

About Maryland Public Television
Launched in 1969 and headquartered in Owings Mills, MD, Maryland Public Television (MPT) is a nonprofit, state-licensed public television network and member of the Public Broadcasting Service (PBS).  MPT is a leading producer and distributor of national public television programming in the United States.  As a major content supplier to PBS stations, MPT boasts a five-decade legacy of groundbreaking and innovative contributions to public television schedules nationwide.  MPT is one of the most prolific producers of regional programming in the public television system, serving a six-state area in the Mid-Atlantic region. MPT’s Emmy award-winning catalog includes news, public affairs, documentary, performance, and lifestyle programming.  For more information visit mpt.org.