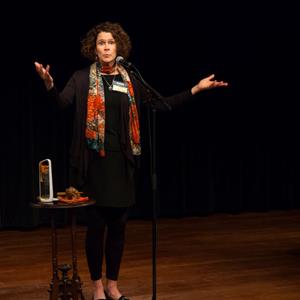 Ingrid Nixon, one of the five featured storytellers at the 2019 Forest Storytelling Festival in Port Angeles, WA

The Forest Storytelling Festival is celebrating its 25th year and is geared towards adults and teens. Ranging from imaginative traditional tales to compelling personal stories, the tellers will take you on a thought-provoking and inspiring journey of the imagination — entirely through the spoken word. Be prepared to laugh, sigh and maybe even cry.

“Proclaiming it Storytelling Week in Port Angeles was important to the City Council in recognizing this longstanding event and its celebration of rich cultural traditions in storytelling, especially considering the tribes of the Olympic Peninsula who traditionally use storytelling as a way to preserve history and communicate their cultural values,” says Kate Dexter, Deputy Major. “There is great value in storytelling and this event highlights so many other great things as well: great storytelling, great participation from around the country, and the great collaboration between the community and Peninsula College who has hosted the event for many years. The Port Angeles City Council is thrilled to support this camaraderie and looks forward to an amazing event.”

Kevin Kling is a regular on NPR’s All Things Considered and rouses audiences with his true-life tales ranging from getting struck by lightning to freight train hopping.

Dolores Hydock’s award-winning personal stories are punctuated by her ability to talk with her hands, elbows and shoulders. Her vivacious telling style fills the room and your imagination as she examines the peculiarities of everyday life.

Ray Christian is a storyteller and instructor at Appalachian State University, who believes (and teaches) “Storytelling encourages conversation about difficult subjects.” Christian is currently teaching The Souls of Black Folk, a course that surveys African-Americans intellectual thought and perceptions of class and race from pre-revolutionary American through the 1970s.

Ingrid Nixon, a Golden Pitchfork award winner, proudly claims her title as a champion liar at several liars contests, including at Seattle’s Northwest Folklife Festival and the Stone Soup Festival in Woodruff, South Carolina. She is also a Seattle Moth StorySLAM winner. Ingrid uses animated storytelling techniques and gestures to bring her characters to life.>

Heather McNeil is a published author and an award-winning third-generation storyteller with a collection of folk tales from her globe-trotting journeys to Africa and her ancestral homeland in Scotland. Her cache of stories can range from a creepy ghost story to an inspiring story of a little ground squirrel standing up to a power-abusing lion.

Cost: Individual tickets or a full weekend pass is available for purchase at the website or at the door.

Children 10 and under are free. Current Peninsula College students receive a 50% discount on all events.

ABOUT THE FOREST STORYTELLING FESTIVAL

The international Forest Storytelling Festival is made possible by The Story People of Clallam County in Port Angeles, Washington. The festival’s mission is to preserve storytelling as a performing art and strive for cultural diversity. In addition to the annual festival, The Story People also host a variety of storytelling events throughout the year from Story Swaps and Slams to even a Liar’s Contest. Learn more at www.clallamstorypeople.org.

Visit Port Angeles is the official destination marketing organization (DMO) of Port Angeles, Washington – the largest city on Washington State’s Olympic Peninsula and the primary gateway to the Olympic National Park, a UNESCO World Heritage site. We are a non-membership economic development extension of the City of Port Angeles with a mission to promote tourism and create nothing but happy vacation memories. To plan your Olympic National Park vacation or to order the latest Visitor Guide, go to www.VisitPortAngeles.com and follow the hashtag #VisitPortAngeles.