2021 Winners of the Elie Wiesel Prize in Ethics 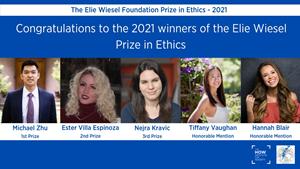 NEW YORK, Oct. 14, 2021 (GLOBE NEWSWIRE) — Michael Zhu, a recent graduate of the University of Connecticut, has won the 2021 Prize in Ethics Essay Contest presented by The Elie Wiesel Foundation for Humanity and The HOW Institute for Society and its Executive Chairman and Founder Dov Seidman.

In “A Lonely Farewell,” Zhu, who majored in molecular and cell biology and economics and minored in healthcare administration, compares western and Chinese medical ethics, exploring differing values and practices around end-of-life care and the moral complexities found in each.

“As someone who hopes to work in the medical field, I want to be able to be there for my patients so that they do not feel alone. I do not think that unwavering respect for individual
autonomy is the answer to all questions surrounding the decision-making process,” Zhu writes in the piece. “Physicians should not shy away from helping their patients beyond diagnosing their illnesses and prescribing them medicines. They must play an active role in understanding their patients’ values and desires to better aid them in choosing the right care.”

Second prize in this year’s contest was awarded to Ester Villa Espinoza of Grand Canyon University for the essay, “The Shoulders of Giants,” which brought into sharp relief the challenges faced by the author’s family in their decision to escape persecution from Soviet-era Ukraine and to seek refuge in the United States.

Nejra Kravic of Scripps College received third prize for “O Land of Bosnia: Identity, Belonging, and the Nation,” which contends with the questions of a post-genocide generation and the search for meaning for the indigenous, minority, and migrant communities in countries torn apart and shaped by war, such as in former Yugoslavia.

Honorable Mention was awarded to two students: Tiffany Vaughan, recent graduate of University of Chicago and current student at Case Western Reserve University School of Medicine for “Kidney Markets: Irreconcilable Aims of Medicine and Organ Markets,” and to Hannah Blair, recent graduate of Covenant College and current master’s student at Arizona State University, for “Unseen and Unheard: The Neglect and Re-Victimization of Sexual Violence Survivors In America’s Legal System.” The winning essays can be found on the Foundation’s website: http://eliewieselfoundation.org/prize-ethics/winners/

The Prize in Ethics Essay Contest, established in 1989 by Professor Elie Wiesel and his wife, Marion Wiesel, is an annual competition that challenges college students to address the urgent and complex ethical issues that confront the modern world. Since its inception, thousands of young people have written essays for consideration.

“Cultivating young moral leadership has never been more important. I know my father would take great pleasure in seeing this new generation of scholars and activists wrestling their thoughts onto the page,” said Elisha Wiesel.

Led by a lifelong pursuit and passion for ethical leadership, Dov Seidman became the exclusive partner of the Elie Wiesel Foundation for Humanity Prize in Ethics in 2008, as the institution was in its 20th year of celebrating ethical decision making among America’s youth. Dov has since partnered with the Elie Wiesel Foundation for Humanity to ensure Elie Wiesel’s legacy lives on by offering the Prize as part of the work of The HOW Institute for Society, a non-profit organization that seeks to build and nurture a culture of moral leadership, principled decision-making and values-based behavior.

“We are proud to partner with the Elie Wiesel Foundation for Humanity in awarding the annual ethics prize. It’s meaningful to join with Marion Wiesel and Elisha Wiesel in celebrating this inspirational group of student winners, who so thoughtfully grappled with consequential issues facing humanity and society through an ethical lens, and did so in both a philosophical and personal way. At a time when there are forces keeping us apart and polarizing our society, the winning students represent the hope that we can come together. These emerging leaders embody Professor Wiesel’s adage of ‘Think higher, feel deeper,’” said Seidman.

About The Elie Wiesel Prize in Ethics Essay Contest
The Elie Wiesel Foundation Prize in Ethics Essay Contest encourages students to write thought-provoking personal essays that raise questions, single out issues and offer rational arguments for ethical action. The contest is open to undergraduate full-time Juniors and Seniors who are registered at accredited four-year colleges or universities in the United States. All submissions to the essay contest are judged anonymously. Winning essays present intensely personal stories, originality, imagination, and clear articulation and convey genuine grappling with an ethical dilemma. For suggested essay topics and more information, visit https://www.eliewieselfoundation.org/prizeinethics.aspx.

About The Elie Wiesel Foundation for Humanity
Elie Wiesel and his wife, Marion, established The Elie Wiesel Foundation for Humanity soon after he was awarded the 1986 Nobel Prize for Peace. The Foundation’s mission, rooted in the memory of the Holocaust, is to combat indifference, intolerance and injustice through international dialogue and youth-focused programs that promote acceptance, understanding and equality. For more information: www.eliewieselfoundation.org, “like” us on Facebook, or follow @eliewieselfdn on Twitter.

The world is being reshaped faster than we have yet been able to reshape our institutions, our leadership and ourselves. A future that includes dynamic capitalism, vibrant democracy, healthy communities and free societies depends on the rise of moral leadership and values-inspired behavior.

The HOW Institute for Society is committed to building a world that is rooted in deep human values and noble ideals. The Institute is animated by an in-depth knowledge of moral philosophy, experience applying philosophical reasoning to modern problems and a belief in the urgent imperative of HOW. Today, HOW we do what we do matters more than ever and in ways it never has before.

For additional information on The HOW Institute for Society, visit www.thehowinstitute.org