Dr. Andrea Small-Howard explains that Gb Sciences’ multicomponent Parkinson’s disease therapeutic addresses this multi-factorial neurodegenerative condition using a combination of cannabinoids that are more effective when used together than singularly, as demonstrated in an animal model of the disease.

LAS VEGAS, May 23, 2022 (GLOBE NEWSWIRE) — Dr. Andrea Small-Howard, President and Chief Science Officer of Gb Sciences (OTCQB:GBLX), presents a Keynote Address today at this year’s NeuroForum Summit on the theme of “Emerging Perspectives in Neurology and Brain Research”. Dr. Small-Howard explains Gb Sciences’ multicomponent, plant-inspired therapeutics may be an attractive alternative for Parkinson’s patients in the future, after their company has secured US FDA approval to market this cannabinoid-based treatment as a prescription drug.

“A multi-factorial disorder like Parkinson’s disease may require a multicomponent drug like ours to successfully manage the symptoms,” said Dr. Small Howard.

The Harvard NeuroDiscovery Center currently estimates that 1 million Americans suffer from Parkinson’s disease. In 2020, the combined direct and indirect costs associated with Parkinson’s disease in the United States were estimated at approximately $52 billion. Although the precise causes of Parkinson’s disease are unknown, several variables, such as aging, genetic predisposition, and environmental factors or exposure contribute to the disease’s progression. A multi-component therapeutic like that of Gb Sciences may be a more effective approach to treatment, allowing the active ingredients to work in concert to help alleviate the symptoms.

In May 2020, Gb Sciences received U.S. Patent No. 10.653.640 for its proprietary cannabinoid-containing formulations for the treatment of Parkinson’s disease. Recent animal studies conducted by the National Research Council of Canada determined that Gb Sciences’ cannabinoid-containing formulations reduced the Parkinson’s-like motor symptoms associated with a loss of dopamine-producing neurons at a statistically significant rate. Initial toxicity studies also revealed no significant evidence of adverse effects.

“Gb Sciences’ novel cannabinoid-containing therapeutics for Parkinson’s disease have demonstrated the statistically significant reduction of Parkinsonian motor symptoms in an animal model, and we are preparing these formulations for a first-in-human study as soon as possible,” said Dr. Small-Howard.

Through GbS Global Biopharma, its wholly-owned Canadian subsidiary, Gb Sciences has contracted with the University of Lethbridge in Alberta, Canada, to complete required rodent dose-response studies. These studies are scheduled to begin in June 2022 and will help determine the appropriate dose range of active ingredients for humans.

With Parkinson’s disease, the second-most common neurodegenerative disease, the market for novel biopharmaceutical products is expected to increase from $3.1 billion in 2016 to $8.8 billion by 2026. Gb Sciences intends to file an Investigational New Drug Application to begin first-in-human clinical trials and evaluate the mechanism of action as early as 2023.

For more information about the company and its strategy, please visit https://gbsciences.com. 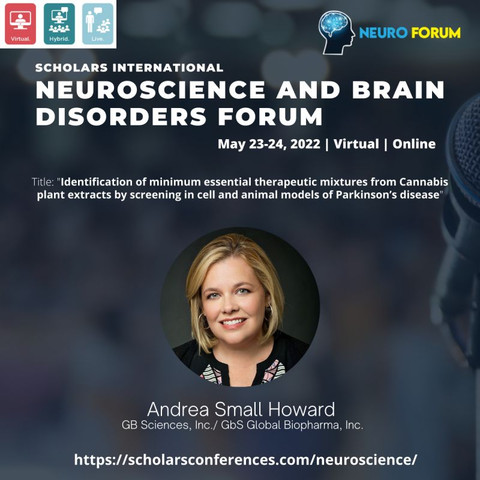 Credit Acceptance Announces the Passing of Our Founder Don Foss