In the White House press conference Wednesday outlining the Trump tax-cut proposals, Gary Cohn, director of the National Economic Council gave assurances that retirement savings (as well as homeownership and charitable contributions)  “will be protected, but other tax benefits will be eliminated.” On face value, that should provide a measure of relief that 401k deferrals and other retirement savings plans that enjoy favorable tax treatment will not be affected by the sweeping Trump tax reform bill.

However, there are two issues that call into question the value of “face value” under the Trump administration. The first concern is that the outline was just that…an outline. No specifics outside of Cohn’s statements have been given other than an assurance that “details to come; at a later date”.

The second issue has to do with the communication style of the current administration. No judgment, it’s just a very different style of communication than conventional White House dialogue. Welcome to the new world of politics. Journalists and pundits alike are still trying to get a handle on the import of communications and management styles of the Trump Administration and until we get some definitive, concrete bills, nobody really knows what will happen.

Despite the somewhat overt assurance that America’s retirement plans will be left untouched, that does not stop the speculators. And a less-than-sympathetic press will no doubt look to find the cloud in any Trump silver lining. I would strongly suggest that anyone reading into Cohn’s statements that the White House has any intention of altering retirement savings plans is without merit.

Under the current economic climate, and more specifically, analyzing the state of US retirement readiness, a change to the favorable tax treatment of plans such as 401k’s would have a catastrophic affect on tens of millions of Americans, for generations to come. It is not happening. There is a difference between healthy skepticism and bloviating. Sure, the $14 Trillion retirement market may look like a nice place to find additional revenue, but like Social Security, this is sacred ground, even for newcomers like Trump. The probability of retirement plans losing tax-deferred status is near zero.

Aside from the obvious negative impact on retirees, the notion of significantly altering the retirement savings plans of tens of millions Americans is just beyond the scope of serious discussion and would never make it through the Congress (even a heavy-stacked Republican one). This would be instant political suicide. On top of that it would cause a seismic ripple effect into the overall economy. If we are being circumspect on this issue, I would tend to lean to the side of “face value on this one. This one is a non-starter.

Follow me
Latest posts by Timothy Kelly (see all)
2017-04-28
+Timothy Kelly
Previous: Third Party Administrator (TPA) vs Bundled Service: What is the Right Choice?
Next: Forex Weekly Outlook May 1-5 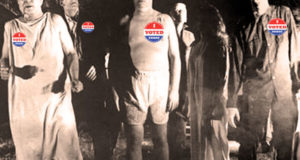 How Trump Has Tamed a Nation of Zombies [OPINION]