Candlestick charting originated from the land of the rising sun over five centuries ago in the late 1600s when the Japanese began applying technical analysis to trade rice on the Dojima Rice Exchange. Munehisa Homma, one of the most famous to have traded on this exchange, used past prices to predict future price movements and generated an enormous amount of wealth. Homma’s trading principles in the rice markets eventually evolved into the candlestick theories used in Japan today.

To technicians, the popularity of the candlestick charts stems from its attractive visual representation as opposed to other charting techniques such as the line and bar charts. More information can be observed with a candlestick chart such as the relationship between the open and close as well as the high and low. As such, more analyses can now be performed and additional charting patterns can be used to assist the trader in the decision process. The underlying strength and overall structure of the markets are now more transparent with the aid of candlestick charts. 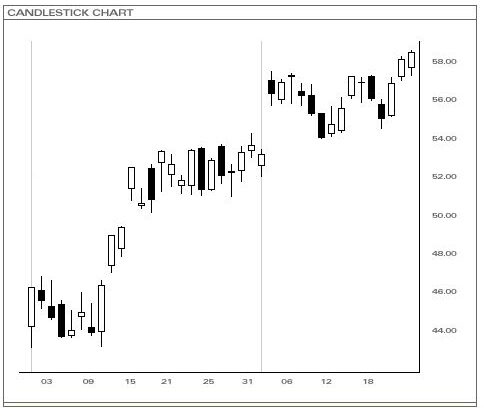 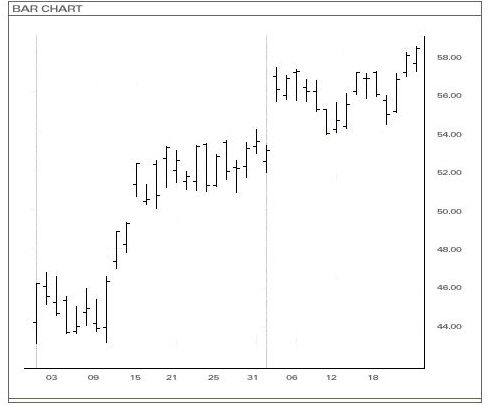 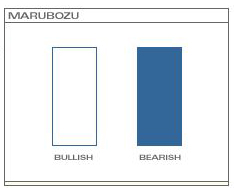 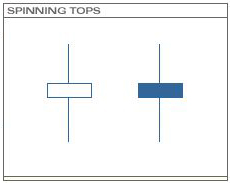 Candlestick formations with short bodies but long shadows are called spinning tops and represent indecisiveness in the markets. A tug-of-war between the bulls and the bears is under way. Even though the session opened and closed with little movement, prices fluctuated significantly higher and lower throughout the session. Neither the buyers nor the sellers gained an upper hand and the result was a deadlock.

A spinning top following a long white candlestick (e.g. white marubozu) or a long up-trend signals weakness in the buying pressure and a potential reversal may be imminent. On the other hand, after a long decline or a long black candlestick (e.g. black marubozu), a spinning top can pose as a warning sign that the bears have weakened and that a change in trend may be on the horizon. 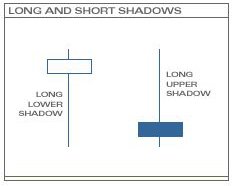 Unlike the spinning top in which both shadows are approximately equal, candlestick formations with short bodies, a long upper shadow, and a short lower shadow generally indicate that buyers were in control during the session and drove prices higher until later when the resistance was met and the sellers drove prices down off their highs for a weak close.

In contrast, candlestick formations with short bodies, long lower shadows, and short upper shadows generally indicate that sellers overwhelmed the buyers for most of the session and drove prices lower until later when the buying pressure resurfaced to cause the strong close, creating a long lower shadow in the process. 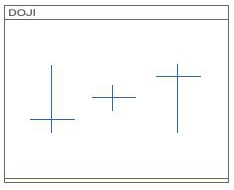 The doji is considered by many to be one of the most important candlestick formations. To be considered a doji, the open and close are equal. In some cases, the open and close may differ slightly, but not by much. The length of the upper and lower shadows of a doji may vary and the result has different interpretations. A doji by itself is neither bullish nor bearish. Analysis of the direction of the market must be done for the price action preceding the doji formation. 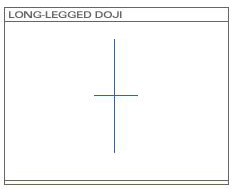 A variation of the doji is the long-legged doji. The difference can be seen in the longer upper and lower shadows. Throughout the trading session, the price was very volatile and traded at large extremes but in the end, little changed as far as the closing price was concerned. These doji are a result of great indifference between the longs and the shorts and the market is at a standoff. 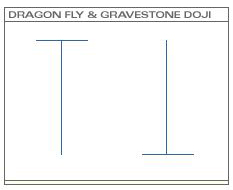 Dragon fly doji formations are created when the open, high, and close are equal, creating an upper case T. The formation has a long lower shadow and no upper shadow. In general, for this formation, the sellers dominated trading for most of the session before the buyers came back and pushed prices back to the previous close, at the high.

On the other hand, gravestone doji formations are created when the open, low, and close are equal, creating an inverted upper case T. The formation has a long upper shadow and no lower shadow. In general, for this formation, the buyers dominated trading for most of the session before the sellers came back and pushed prices back to the previous close, at the low.

There are many different candlestick formations and we have covered only a few in the previous section. On its own, most formations tend to have a neutral bias as to where the market is heading. In order to forecast successfully with candlesticks, the preceding price action must first be analyzed. There are countless candlestick patterns but the most important ones include:

USD/CAD to stay way above 1.3400 despite recovery attempt by USD Index